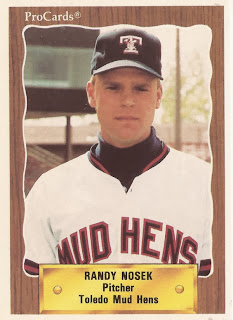 In his first major league start, Randy Nosek didn't do too bad. He went 4.2 innings, giving up two earned runs. Though he also walked eight.

The same couldn't be said for his second start five days later.

"It was a nightmare," Nosek told UPI after that June 1, 1989 contest. Nosek gave up six earned runs and didn't make it out of the first inning. "You don't think about it happening to you. But they tell me it happens to the best of them. I have to take it as a learning experience."

Nosek made the majors in 1989, four years after the Tigers selected the high schooler in the first round with the 26th pick of the 1985 draft.

But Nosek would never fulfill the expectations of that first-round status. After that second start, Nosek only got three more major league appearances, all three the next year in 1990, ending his big league career with five games played.

After being selected by the Tigers, Nosek almost didn't sign. He turned down their first offer.

"I think, right now, I'm not ready to go pro," Nosek told The St. Joseph News-Press/Gazette that June. "It's going to take a lot (of money to get him to change his mind)."

By mid-August, however, Nosek signed.

With the delay, Nosek saw his first professional action in 1986 at rookie league Bristol and single-A Gastonia. He went 10-9 between them, posting an ERA north of 5.

He remained in single-A through 1988, playing in only eight games for Lakeland in 1988. In 1989, Nosek made AA London. He also made the jump to Detroit.

Nosek got the call after Jack Morris was placed on the disabled list. At that point, Nosek was 3-1 with London, with an ERA of 3.10.

After that second nightmarish start, Nosek returned to London. He finished the season there, going 8-10 with a 4.95 ERA.

Nosek started 1990 at AAA Toledo. In 19 starts, Nosek went 5-8 with another ERA north of 5. But he did return to Detroit in September. In his first start Sept. 1, he went six innings, giving up four earned runs.

His second start of 1990, however, rivaled his second of 1989. He pitched to just four batters, walking all four before being pulled. He didn't pitch again until Oct. 2, one inning of relief. He gave up one hit and struck out one, ending his major league career.

Going into spring 1991, the Tigers still believed Nosek could pitch, but he needed to show it, according to The Associated Press. In a March 14 game, Nosek gave up one run in one inning of work, saved from more damage by a running catch from his outfield.

Thrown by the long fly, Nosek's catcher Mickey Tettleton went out to calm the still-24-year-old pitcher down.

"I think that's what a catcher is supposed to do," Tettleton told The AP afterward. "The kid's got an arm. All he needs is confidence. This isn't the time to be running him down."

Nosek started the season back at AAA Toledo. Any confidence he had didn't show. He got into one game, starting it. But he didn't get out of the first and soon found himself on the disabled list. He did not return.