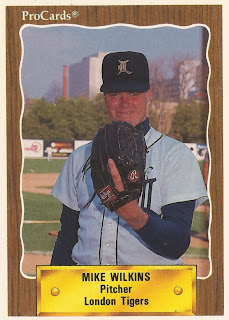 "I think about it every time," Wilkins, a member of the AA London Tigers, told The Gazette after the game at nearby Albany. "But usually by the first inning, you've given up a base hit and it's over. Tonight, I got through the second, then the third."

In the eight-inning game, he got into the eighth, before giving up his hit. He also did it without getting ahead on a batter in the first five innings. "I kept going into the dugout laughing," Wilkins added to The Gazette. "I didn't know how I was doing it."

Wilkins got to think about throwing no-hitters through AA London in the Tigers system, then AA San Antonio and AAA Albuquerque. But Wilkins would never find himself taking a major league mound, thinking of throwing a no-hitter there. His career would end after seven seasons, without making the majors.

Wilkins' professional career began in 1987, drafted by the Tigers in the 17th round out of Lamar University. He played that year at rookie league Bristol, going 2-7 with a 5.70 ERA.

The next year, at single-A Fayetteville, Wilkins improved. He posted a 14-9 record, with a sub-3 ERA. In 1989, he split time between single-A Lakeland, then made AA London in time for his no-hit bid that August.

In addition to the near no-hitter at London, Wilkins also threw a seven-inning four-hitter against Albany in July. Wilkins remained at London for 1990, posting an even better 13-5 record, with a 2.42 ERA. His record was helped by a seven-inning, five-hit shutout in April against Canton. He also had three shutouts, to lead the league.

In October, however, Wilkins was off to the Dodgers system, traded for fellow pitcher Mike Munoz. Munoz had already seen time in the majors, and would see time in 12 seasons before his career ended in 2000.

Wilkins would play 1991 back at AA, at San Antonio. He also would lose the edge he had at London. He went 6-6 with a 4.30 ERA. The next season, Wilkins was promoted to AAA Albuquerque. He was also moved mainly to relief. In 46 appearances, he posted a 3.57 ERA.