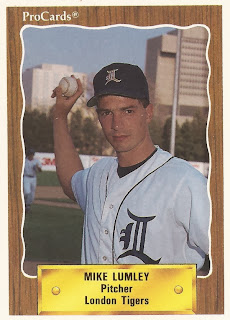 Lumley was playing for the AA London Tigers, in his hometown of London, Ontario.

"I grew up here. I played Little League ball in London. I played in this park when I was a kid," Lumley told Davis in Davis' book "Small-Town Heroes." "Now I'm pitching here professionally. Sure, it's a bit more pressure with all those people knowing you. But it feels good. This is my home."

Lumley's baseball connections to London didn't stop there and they continue in 2011. Lumely is now the long-time head baseball coach at London's Western Ontario University and coaches a team of London teenagers, both teams playing games at Labatt Park, the same park the London Tigers called home.

Lumley's professional career began in 1988, taken by the Tigers in the fifth round of the draft out of Eastern Michigan University. He was selected after a season at Eastern Michigan where he no-hit rival Western Michigan. He was also selected by the organization that would place its AA team in his hometown the next year.

The right-hander played that first season at single-A Fayetteville, going 3-3, with a 2.91 ERA. He moved to single-A Lakeland for 1989, posting another sub-3 ERA and a record of 8-9. He helped Lakeland to a three-hitter that May. He went six innings, allowing one earned run in a July game.

Lumley returned home on the playing field for the first time in 1990. He pitched in 15 games for the AA Tigers, with a 6.32 ERA. Returning to Lakeland, his ERA dropped back to 2.83.

For 1993, the Tigers promoted him to AAA Toledo, joining fellow pitcher John DeSilva. "Lumley pitched well his last couple times out, and so did DeSilva," Toledo Manager Joe Sparks told The Toledo Blade early that April.

But, after six appearances, Lumley wasn't pitching well. In 12.1 innings, Lumley'd given up nine earned runs. Back at London, Lumley, the year he spoke with Davis, Lumley didn't do much better. In 26 appearances on the year, Lumley's ERA hit 4.57. It was his final year as a player.

Lumley remains in London today, serving as the Western Ontario Mustangs head baseball coach, and a coach for the London Badgers youth team.

"I played six years of pro ball in the States, but since I've returned, I've decided that I wanted to help the kids in this area get the things I had in life," Lumley told The University of Western Ontario Gazette. "Playing pro ball and going to university in the U.S. is a great life and I like trying to duplicate that experience for local kids."
1990 CMC-Pro Cards Tally
Players/Coaches Featured:1,317
Made the Majors: 716 - 54.4%
Never Made Majors: 601-45.6%
5+ Seasons in the Majors: 310
10+ Seasons in the Minors: 182
Posted by Steve78 at 1:00 PM