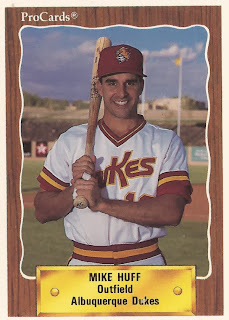 Mike Huff believed his stats at AAA were enough to be called up that September in 1990. He'd gotten a brief look at the Dodgers the previous year. But, this year, no call came.

"When no callup came for me, I began to feel self-doubt," Huff told The Chicago Tribune the next May. "I`d always been confident, but this is the nature of the beast."

Huff, though, found new life that next spring, taken by the Indians in the Rule 5 draft, getting into 102 games that year. He went on to have time in a total of seven big league seasons.

Huff's career began back in 1985, taken by the Dodgers in the 16th round of the draft, out of Northwestern.

In 1989, Huff also got his first look at the majors, debuting that August. He got into 12 games, getting five hits in 25 at bats.

Then he spent that entire next season back at Albuquerque. Taken by the Indians, Huff spent the first half of the year in Cleveland, hitting .240 in 51 games. In mid-July, Huff was taken off waivers by his hometown White Sox. The White Sox were also in the hunt.

"I can't think of anything better than a pennant race," Huff told reporters after Huff helped the White Sox beat the Tigers in August with a two-run double. "I've been able to come over here and relax."

In June 1994, Huff helped the Blue Jays beat his former team in Chicago with a double and a home run. He also impressed his new manager with his offense, rather than his defense, The Associated Press wrote.

"We hadn't seen him play that much," Blue Jays manager Cito Gaston told The AP of Huff. "It's a surprise and a pleasant one. He's done a good job."