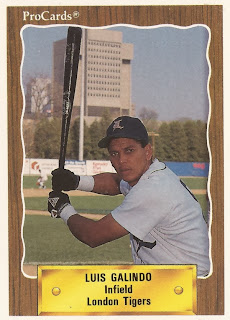 The Lakeland Tigers jumped on the Fort Lauderdale Yankees in this late-July 1989 contest. And helping them do that was infielder Luis Galindo.

Galindo picked up three hits in the game, helping his single-A Tigers to a 10-3 victory, The South Florida Sun-Sentinel wrote.

Galindo was in his third season in affiliated ball that year with Lakeland. He would get two more seasons, both at AA, never making the majors.

Galindo's career began in 1987, signed by the Tigers as an undrafted free agent out of his native Venezuela.

Galindo returned to Lakeland for 1989. He hit .257 that year, with 39 RBIs. In a May game, Galindo picked up two hits. He picked up another two hits in each game of a July double-header.