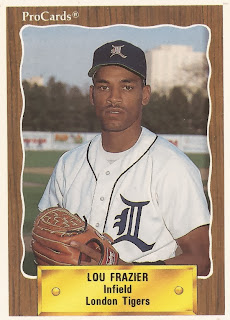 Lou Frazier was quick and he showed that quickness in this May 1994 series as a fill in for the Expos.

In three games, Frazier swiped six bases, The Associated Press wrote. Frazier also told The AP he was confident in what he could do over a longer stretch.

Frazier, who once swiped 87 in 130 games at high-A, never got close to 500 major league at bats in a season. But he did eventually get time in five major league seasons, seeing more than 100 at bats in three seasons. He swiped a total of 58 major league bases in his career.

Frazier has since gone on to teach others the art of base stealing as a minor league instructor and major league coach.

Frazier's career began in 1987, taken by the Astros in the first round of the June secondary draft out of Scottsdale Community College.

With the Astros, Frazier started in the rookie Gulf Coast League. He made it to AA Columbus in 1989. For 1990, he moved to the Tigers system in a trade, playing that year at AA London. He then stayed in London through 1992.

During that time, Frazier's manager Felipe Alou once called Frazier the best fourth outfielder in the game, according to The Boston Globe.

In addition to his 58 career major league stolen bases, Frazier stole a total of 465 in 12 minor league seasons. Starting 1998 with the White Sox, Frazier explained his preparation.

"I start by watching the pitchers in warmups," Frazier told The Chicago Tribune. "I notice if they have a slide step or a high leg kick. That way, if you get on, you don't have to wait a couple pitches to get going."

His playing career over, Frazier got into coaching, teaching those techniques to younger players. In 2007, he served as the Red Sox minor league outfield and base running instructor. In 2008, he served as Pirates first base coach in Pittsburgh.

In March 2007, with the Red Sox, Frazier was high on a prospect named Jacoby Ellsbury, according to The Bangor Daily News.