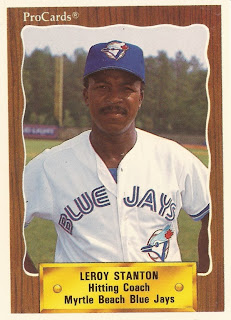 Leroy Stanton went back on the Reggie Jackson fly ball in this April 1973 game, then he leaped at the wall, according to The Oakland Tribune.

On what would have been another Jackson home run, the Angels' Stanton pulled it back, The Tribune wrote.

"When it hit my glove," Stanton told The Tribune, "my hand was all the way over the fence. I had to look in my glove to make sure I had it."

Stanton pulled back that home run in his second full season in the majors, his fourth with time in the bigs. He went on to see time in nine seasons.

His playing career over, Stanton went on to another career, one as a coach in the minors.

Stanton's career in baseball began in 1965, signed by the Mets as an amateur free agent, out of his native South Carolina.

With the Mets, Stanton played 1965 in the minors, then isn't recorded as playing again until 1968. Stanton made AA Memphis in 1969, then AAA Tidewater in 1970. Stanton also debuted in Queens that September.

Stanton got into four games for the Mets in 1970, then five in 1971. He got his first full season in the bigs in 1972, after being traded to the Angels. Stanton was sent to the Angels in the trade that also sent Nolan Ryan west. Going the other way was Jim Fregosi.

"We realize that Fregosi has been a six-time All-Star and a fine player with the Angels for 11 years," Angels GM Harry Dalton told UPI. "But we picked up one of baseball's best arms in Ryan and Stanton figures to give us some of (the) righthanded power we need."

Stanton played the next five seasons with the Angels, hitting 12 home runs his first season there. He hit just eight in 1973, but three in one game. That August, he hit a 10th-inning, game-winning home run. His best year at the plate with the team came in 1974, hitting .267, with 11 home runs.

For 1977, Stanton moved to the Mariners, taken in the expansion draft. His first year with the Mariners was perhaps his best as a player. He hit .275, with 27 home runs. One of his home runs was a two-run shot in late-July.

Stanton played one more season in the majors, in 1978 with the Mariners. From there, me moved to Japan for a season, with Hanshin. Stanton then finished out his career with a season in Mexico.