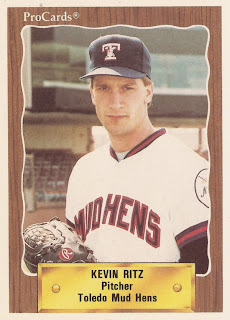 Called up from AAA Toledo the previous month, the Tigers had high hopes for Kevin Ritz. Ritz had posted a 3-1 record with a 3.79 ERA in a few weeks' work.

"He's a big strong kid that we have to watch," Tiger Manager Sparky Anderson told the Associated Press in August 1989. "If he keeps his head on his shoulders, and he seems to, he's going to be quite a pitcher."

Ritz would eventually become quite a pitcher, for a couple brief seasons, but not for some time and not for the Tigers.

Ritz ended 1992 with a 2-5 record and a 5.60 ERA. But it wasn't enough for the Tigers to protect him in that November's expansion draft. The Rockies selected him 46th.

In 2008, MLB.com caught up with Ritz at home in Ohio. He was then serving as a full-time dad.

"I pretty much just follow the kids around all the summer sports," Ritz told the site.