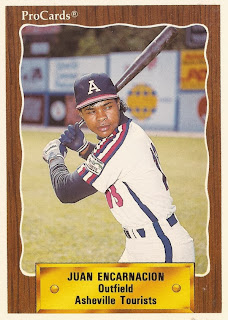 San Pedro De Marcoris also produced Juan Encarnacion. Encarnacion became a pro, playing in the United States. Encarnacion, though, never made it to the majors.

He also played just three seasons as a pro.

Encarnacion's career began in 1987, signed by the Astros as an undrafted free agent out of his native San Pedro.

Encarnacion returned to the GCL Astros for 1989, getting into 46 games. His batting average dropped to .192.

For 1990, Encarnacion moved to single-A Asheville. There, he got into 104 games, hitting seven home runs and knocking in 44. His average, though, was no better, finally coming in at .202. It was his final season as a pro.