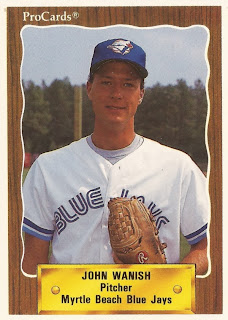 John Wanish came on in the eighth and was nearly perfect. He had to be, because he was protecting a one-run Salem Dodgers lead in this August 1988 contest.

Wanish ended up finishing out the game, going two full innings. He gave up a single walk, but no hits. More importantly, he didn't give up a run, saving the game for the short-season club, according to The Eugene Register-Guard.

It was Wanish's first professional save, in his second professional season. He went on to pick up 14 other saves over the next three seasons. Wanish, though, would never make AA.

Wanish's professional career began in 1987, taken by the Dodgers in the 16th round, out of Florida State.

At Florida State in 1987, Wanish was 2-1, with a 2.42 ERA by late-May, a season in which Wanish and the Seminoles would go to the College World Series.

With the Dodgers, Wanish started at rookie Great Falls. He went 2-7 over 15 outings, seven starts. He moved to short-season Salem and single-A Bakersfield for 1988. Between them, he went 5-3, with a 4.07 ERA.