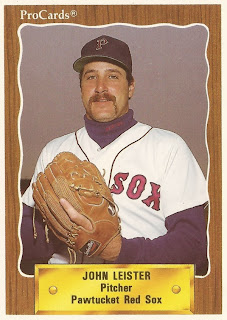 John Leister had dreamed of this since he was little. Now, in July 1983, that dream for the future major league baseball player was being realized: He was playing football.

"It was my childhood dream to be a professional football player," Leister told The Pittsburgh Press in July 1983, at Pittsburgh Steelers camp. "So you've got to go for it. You gotta give it a try if it's within your grasp. I'm sure there will be times when I'll say 'I wish I had played baseball.' But I'm gonna do my best here."

Leister's football career, however, didn't last long. The Steelers cut the former Michigan State quarterback at the end of training camp. But Leister did go on to play baseball. And, drafted by the Red Sox, he went on to see time in two big league seasons.

The Red Sox selected Leister that January in the secondary draft, after one more brief look at football, with the Michigan Panthers of the USFL.

At Michigan State, Leister played baseball well enough to be taken the previous June by the Athletics in the sixth round. Leister completed 313 of 686 passes over his college football career. His football options exhausted with the Steelers and the Panthers, Leister turned to baseball the next spring with the Red Sox.

He started at single-A Winter Haven and received a welcome that may have made him regret leaving football behind. That April, in his first professional game, Leister gave up 11 hits and seven runs.

"This was John's first start, and he was around the plate," Winter Haven Manager Dave Holt told The Lakeland Ledger afterward. "He did relieve over the weekend and did a pretty good job for us. He didn't miss too many bats tonight, did he."

With New Britain that July, Leister threw a game that may have made him happy he left football behind. He threw a one-hitter against the Nashua Pirates.

"You just have those nights when everything's working," Leister told The Nashua Telegraph after the game. "My best pitch right now is my curve, and I was dropping it over the plate early."

Leister made AAA Pawtucket in 1986, returning there to start 1987. It was in May that he made the Red Sox. His debut was reminiscent of that Winter Haven debut. He got the start May 28 against Cleveland, lasting only two innings and giving up six runs.

He got into five games through mid-June, ending the stint with a 13.85 ERA. In his final outing, against Cleveland again, he pitched one inning, giving up four earned runs.

"(Leister) can't pitch from behind," Red Sox Manager John McNamara told The Patriot Ledger News Service. "They have a good hitting club and he was falling behind batters."

Leister buried his head in his locker after the game, the news service wrote, as he knew his likely destination, back to the minors. He returned for three September starts, getting his ERA back under 10, at 9.20.

He started one game, got into another, giving up three earned runs in 5.2 innings of work. He returned to Pawtucket, going just 2-10 there, ending his playing career.

Leister's playing days over, he returned to his dual baseball and football roles, at Alma College in Michigan. In 1994, he took the roles of assistant coach in both spots at Alma. In 1997, he became the school's head baseball coach, and, in 2007, the school named him their newest athletic director, a job he continues to hold in 2013.


The Greatest 21 Days caught up with John Leister in April 2012, read the interview: John Leister, Most Influential