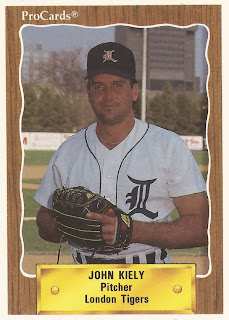 The Tigers needed someone to come in and get some outs in this June 1992 game and John Kiely came out and did that.

He threw 3.2 innings, giving up one earned run. He also picked up the win.

"Kiely saved the day for us," Detroit manager Sparky Anderson told The Associated Press after the 11-7 victory. "Our bullpen is tired. It's been used a lot. And he gave us some innings."

Kiely came out for the Tigers and threw his sinkerball in 39 games that year, posting a stellar 2.13 ERA. Kiely, however, couldn't match that year's performance. He played in just one more big league season, just three in total.

Kiely's career began in 1987, signed by the Brewers as an amateur free agent out of Bridgewater State College in Massachusetts.

Kiely's time in the Brewers system, though, was brief. He pitched in nine games in 1988 for the Brewers' Arizona League team. He then moved to the Tigers and the rookie Bristol team.

Kiely made AAA Toledo in 1991. By July, he was in Detroit. With the Tigers that year, Kiely got into seven games in relief, 6.2 innings. He also gave up 11 earned runs.

Coming back for 1992, Kiely made Detroit again by mid-June. He stayed up through the end of the year. One of his bad outings came in July. He gave up just one hit in 1.1 innings of work, but got his sinkerball up, allowing a bases-clearing double that proved the difference in the game.

"You're going to have days like this. Maybe two days like this," Kiely told The AP after that game. "Maybe I was too strong because everything I threw was up."

Kiely came back to the Tigers in 1993 for eight final appearances, giving up 10 earned runs in 11.2 innings of work.