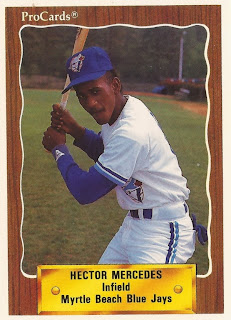 Hector Mercedes hit at the bottom of the Myrtle Beach lineup in this July 1990 game, but he still provided some power.

In the bottom of the fourth against Sumter, Mercedes' team already up 3-0, Mercedes knocked a two-run blast. That blast ended up giving Myrtle Beach enough for the win, the single-A Blue Jays taking the game 6-4, according to The Sumter Item.

Mercedes' professional career began in 1988, signed by the Blue Jays as a free agent out of his native Dominican Republic.

For 1990, Mercedes moved to single-A Myrtle Beach. He got into 98 games, hitting .196. In a June game, Mercedes got on base, scoring on a triple. In another June game, he knocked in a run with a single then scored later in the frame.