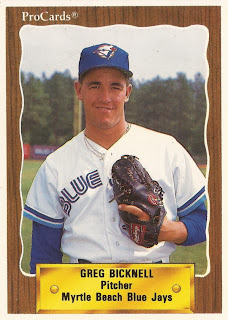 Greg Bicknell helped pitch his single-A Peninsula Pilots to the first-half championship in 1992, throwing a five-hit shutout against Durham, according to The Newport News Daily Press.

For Bicknell, he told The Daily Press he hardly knew what to say.

"This is my first championship team in the pros. This is just an exciting time in my life," Bicknell told The Daily Press. "I've never played before a crowd like that. We were pumped up. This was the championship game. You didn't want to let it get to you, but you knew it was a key game.''

For Bicknell, his time in the pros would end up being a long time. By the time he was done playing, Bicknell could count a total of 18 seasons as a pro ball player, six spent in affiliated ball.

In those six affiliated seasons, though, Bicknell, never got higher than AA, never making the majors.

Bicknell started his career in 1989, taken by the Blue Jays in the 39th round of the draft, out of Fresno City College.

"I thought I threw pretty well today," Bicknell told The Lawrence Journal-World. "My job is to get ground balls, and that is what I tried to do. They just happened to hit the ball down the line where we weren't."

Bicknell returned to Chico in 2007, then played his final season as a pro there in 2008. In August 2008, Bicknell pitched well, but it wasn't enough for his Outlaws to win.