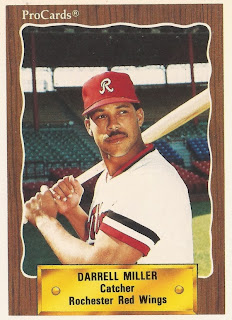 The latest batch of graduates had just signed letters of intent in November 2008 to play college baseball and Darrell Miller was satisfied.

The youths were graduates of Major League Baseball's Urban Youth Academy in Compton, headed by the former Angel Miller.

"What we've said all along is that they won't all make the big leagues," Miller told MLB.com in November 2008 article, "but we can get them to focus on school. If we can get 60 percent of the kids to pass along to a university or junior college, we're doing our job."

Miller is now known as former Angel and current urban youth academy's director. He's been known by other names in the past, including two referencing more famous siblings.

Miller was drafted by the Angels in the ninth round of the 1979 draft, spending five full seasons in the minors before finally getting called up to California.

Miller primarily played catcher and outfield during his time in the majors. He had briefly left catching behind in college, forced out by vision problems. With contacts, however, catching was added back to his fielding options, according to The Miami News.

Signing with the Yankees in 1989, Miller spent that year at AAA Columbus. He spent 1990 with Baltimore's AAA team the Red Wings, then went to the Mariners' team in Calgary, ending his playing career.

By the time of his August 1984 call-up, Miller was already known. He was known as the brother of Cheryl Miller, the star of that year's U.S. women's basketball gold medal winning team. Within a few years, both Darrell Miller and sister Cheryl Miller would get their own new names, that of siblings of Indiana Pacer star Reggie Miller.

"I'm extremely proud of that girl," Darrell Miller told The Miami News after his call-up and just after the Olympics. Of his brother Reggie, then a UCLA sophomore: "He's going to be a great player; I really believe that."

His siblings' success was with basketball, Darrell's was with baseball. Now, heading an academy that according to ESPN.com has 15 instructors with major league experience, working with players age 8 to 18, Darrell Miller is trying to get more youth to follow his example, into baseball.

Speaking to ESPN.com in 2008, Miller said the academies could help with lagging African-American interest in the sport.

"I don't go by numbers or percentages," he told the site. "Society has changed. With the constant competition from football and basketball and the influx of the Latin player, I don't think we'll ever get back to [28 percent]. [Even] if it stays where it is I'll say fine. We've done all we can do to bring baseball to all the fans, including inner city youths and African-Americans."