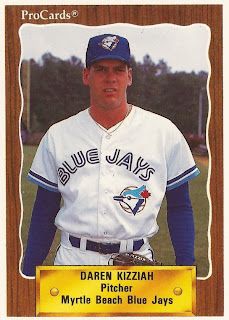 Daren Kizziah went five innings in this April 1986 game for Shelton State, giving up just a single hit, according to The Tuscaloosa News.

It was a performance that caught the eye of his coach, Bobby Sprowl, The News wrote.

"Daren Kizziah threw the ball as good as he has all year," Sprowl told The News. "He really turned it loose. If he continues pitching like that, he'll really help us."

Kizziah ended up pitching like that enough to helping himself on to Western Kentucky, and the pros. In his pro career, Kizziah lasted five seasons. He made AA in three of those seasons, but he never made it higher.

Kizziah's pro career began in 1989, taken by the Blue Jays in the 37th round of the draft, out of Western Kentucky.

A native of Alabama, Kizziah attended Brookwood High School and then Shelton State. In summer 1985, Kissiah played for Tuscaloosa Post 34, picking up a win in the regional tournament that August.

From Shelton State, Kissiah moved on to Western Kentucky. In April 1989, Kizziah was perfect into the fifth inning of a game, before being pulled to be saved for a weekend game. In May, he was named second-team all-conference.

In June, he was drafted, and he quickly signed.

"I've had three weeks off since our season ended," Kizziah told The News. "I feel good, and my arm is strong. I'm excited and ready to go."

With the Blue Jays, Kizziah started at short-season St. Catharines. He went 3-3, with a 2.50 ERA over 17 outings, 11 starts. He moved to single-A Myrtle Beach for 1990, turning reliever. Over 35 outings, six starts, he picked up six wins and four saves.

That off-season, Kizziah told The Bowling Green Daily News he was looking forward to a chance to move up, with the help of two new teams joining the league for 1993.

"I've got big hopes with the expansion coming up," Kizziah told The Daily News. "That's going to open up a lot of spots in Triple-A. It's going to help everybody."