Basilio Cabrera's Lakeland Tigers started the 2002 season slowly, hitting just .218. Then the team got hot, and the hitting coach told The Lakeland Ledger he knew why.

"We've been bringing out four guys every day for extra batting practice and we knew this team's hitting would come around," Cabrera told The Ledger.

By that point, Cabrera had been helping young hitters come around for a decade, as a hitting coach. And he's continued to do that as a coach and manager since.

Cabrera became a minor league coach and manager after a stint playing himself. As a player, Cabrera managed seven seasons, but he never could get himself to come around to the majors.

Cabrera's career in baseball began in 1986, signed by the Tigers as an undrafted free agent out of his native Dominican Republic.

With the Tigers, Cabrera started at rookie Bristol, hitting .266 over 47 games. He moved to single-A Fayetteville for 1987, hitting .251 there. That April, he knocked in two runs on a double.

Cabrera played two more seasons, 1991 at Lakeland and London and then 36 final games with London in 1992.

From there, Cabrera turned to coaching, taking over at rookie Bristol. That started a career that continued into 2013, Cabrera coaching or managing largely in rookie ball or in short-season.

Cabrera has also watched his son enter the game. Yordy Cabrera was taken by the Athletics in the second round of the 2010 draft, playing 2013 between single-A Greensboro and high-A Jupiter.

"He's a five-tool player," Basilio Cabrera told PerfectGame.org of his son in 2009. "He can do anything in baseball. Power. Speed. Hit for average. Great arm." 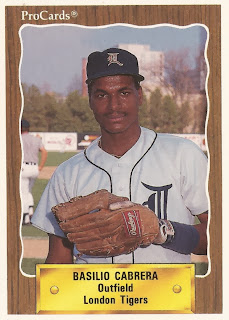