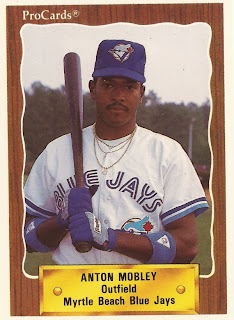 Anton Mobley helped his Myrtle Beach Blue Jays get off to a quick start in this June 1990 contest.

He did so by hitting a second-inning solo home run. With Mobley scoring another run on the day, his single-A Blue Jays went on to defeat Charleston by a score of 10 to 6.

Mobley hit that home run for Myrtle Beach in his second professional season. It was also his last.

Mobley's pro career began as the Blue Jays selected him late in the 1988 draft, in the 73rd round, out of Fernandina Beach High School in Florida.

He didn't hit the field for the Blue Jays, though, until the next year, at short-season St. Catharines. At St. Catharines, the outfielder hit .224, with eight home runs. He also knocked in 31 and stole five bases.

For 1990, Mobley started at single-A Myrtle Beach, getting into 52 games there. His average, though, dropped to .181. He hit six home runs along the way and knocked in 13.

By mid-year, though, Mobley was back at St. Catharines. he finished out the year there, getting into 66 games. But he couldn't heat up his bat.