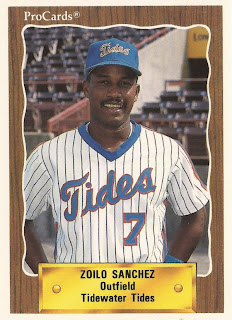 One of the home runs was a grand slam, both helping his Mets to a 12-7 win, The Sumter Daily Item wrote.

Sanchez' career began in 1983, having signed with the Mets out of his native Dominican Republic. He played that season in the Gulf Coast League, hitting .238 and no home runs. He also got an RBI single in a July game, one of 24 RBIs on the season.

Back in rookie ball for 1984, at Kingsport, Sanchez improved, hitting .259 with four home runs. He made Columbia and the single-A South Atlantic League in 1985. In addition to the 15 home runs that year, he didn't hit much else. His average dropped back to .236. But he did make the All Star game.

Sanchez stayed in single-A through 1986, playing that year at Lynchburg. His average also increased to .296, while hitting 14 home runs.

That earned Sanchez a trip to AA Jackson, his average returning to .238. It also earned him a spot on the Mets' winter 40-man roster. Sanchez played with the Mets that spring, scoring in one mid-March game.

Sahcnez split 1988 between AA Jackson and single-A St. Lucie. With St. Lucie, in one late August game, Sanchez got the go-ahead hit in the 15th inning. Sanchez got his first taste of AAA in 1989, two games at Tidewater.

He made Tidewater full time in 1990, hitting .282 with six home runs. In one early August game he got two hits. His average was decent, but it wasn't enough for Sanchez to get called up to New York. His career ended without making the majors.