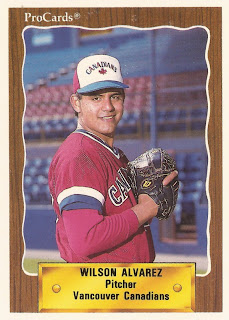 In his first start, in July 1989 with the Rangers, Alvarez gave up three hits, two of them home runs and two walks. He didn't even record an out, The New York Times noted.

In his second start, which came in August 1991 with the White Sox, Alvarez gave up three more walks, but three fewer hits. He also recorded 27 more outs. He recorded a no-hitter.

"A couple years ago, I didn't have too much experience," Alvarez told The Times after his gem. "That happened too quick. They call me up after I played just three weeks of AA ball. Right now I feel more comfortable."

Alvarez went on to start - and have success - in 12 more major league seasons, making a total of 14 for his career. He would pick up more than 10 wins four times and make and All-Star team.

Alverez' career began in 1986, signed by the Rangers as an amateur free agent out of Venezuela.

Alvarez started in the rookie Gulf Coast League in 1987, also playing at single-A Gastonia. Alvarez got a brief look at AAA Oklahoma City in 1988, then played 1989 between single-A Port Charlotte and AA Tulsa.

He also debuted with that one start with the Rangers, picking up an ERA of infinity.

"This was my first time, and the experience is going to help me out a whole lot when I go on," Alvarez told The Associated Press after his debut.

By the end of the month, Alvarez was on his way to the White Sox in the Sammy Sosa deal. He played out the year at AA Birmingham and the next between Birmingham and AAA Vancouver.

Alvarez spent time relieving for the White Sox in 1992. He returned to starting full time in 1993 and the White Sox were rewarded for the move with a 15-8 record and 2.95 ERA in 31 starts.

That October, Alvarez and the White Sox found themselves in the playoffs. Alvarez also picked up the first of two ALCS wins for the White Sox by a 6-1 score.

"After we scored five runs (in the third inning), I said to myself, `OK, that's the game,' " Alvarez told The Chicago Tribune afterward. "I knew I had good stuff warming up in the bullpen and I told myself, challenge the hitters, have some fun."

His 1997 numbers were split between the White Sox and the Giants, traded to the Giants at the deadline. For 1998, Alvarez signed with the new Tampa Bay Devil Rays.

Alvarez stayed with the Devil Rays through 1999, going 6-14 his first year and 9-9 his second. A rotator cuff injury then forced Alvarez to miss two major league seasons.

Alvarez, though, came back to pitch in four more seasons, with the Devil Rays and then the Dodgers, concluding with three outings in 2005 with Los Angeles, ending his career.