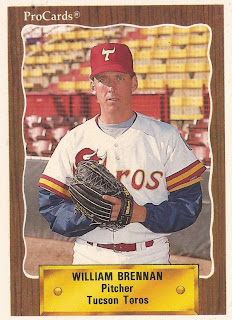 William Brennan's catcher that game in 1989 noted Brennan threw well overall, but he hurt himself.

It was Brennan's major league debut, and he took the loss in the 3-2 contest after bouts of control problems and difficulties holding runners.

"But he got his feet wet," catcher Mike Scioscia told The Los Angeles Times afterward, "and hopefully won't make those mistakes again. Maybe if we would've had a better offensive attack, it would have overshadowed a few of those plays."

Brennan did get his feet wet, but that's about all he had time to do in that trip to the Dodgers. He ended up getting them wet only 11 more times in the majors, three more that year and his final eight a full five seasons later.

Brennan's career began in 1984, signed by the Dodgers as an amateur free agent out of Mercer University in Georgia.

For 1988, the season he debuted in the majors, Brennan started back at Albuquerque. On the season there, Brennan went 14-8 with a 3.82 ERA.

It was his last major league playing time until 1993. Brennan spent 1989 back at Albuquerque. For 1990, Brennan moved to the Astros, taken in the Rule 5 draft. He played that year at AAA Tucson.

For 1991, Brennan signed with the Expos and moved backward. He played the year at AA Harrisburg. That August, he threw two wild pitches in the 10th inning of a game, taking the loss. Overall, he went 3-2 in 21 relief outings.

Brennan started 1992 with the Tigers at AAA Toledo, then moved to the Cubs at AAA Iowa. It was with the Cubs that Brennan returned to the majors.

He returned in September 1993, getting into eight contests and 15 innings. He went 2-1, giving up seven earned runs. His second win came in the third-to-last game of the season, against the Padres.

Brennan played one more season, with the Cubs at AAA Iowa, ending his career after a decade as a pro.