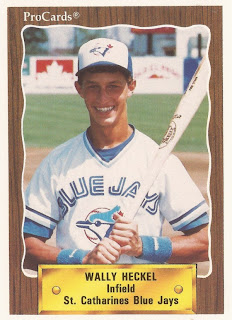 St. John's University was looking to advance in the 1988 Big East Tournament and Wally Heckel helped them do that, according to The Associated Press.

Hitting against Seton Hall, Heckel picked up three hits, including a home run, helping his team to a 6-2 victory.

Heckel's performance that year got the notice of scouts for the Blue Jays, the team taking him way down in the 65th round of the draft that year.

Heckel instead stayed in school, but the Blue Jays didn't forget him. A year later, Heckel had improved his draft stock considerably, the Blue Jays taking him in the 12th round. Heckel is also credited by his full name, Walter Heckel.

As a pro, though, Heckel couldn't show that same improvement. His professional career ended up consisting of just two seasons.

Heckel's efforts at St. John's in 1988 earned him selection to that year's All-Tournament Team. In 1989, he also won First Team All-Conference honors.

In summer of 1988, Heckel helped manufacture a run for his summer league Nassau Collegians, singling, stealing and scoring in a game. He also made the league All-Star team, according to The Allentown Morning Call.

At St. Johns, Heckel played with a teammate who would go on to be synonymous with the steroid scandal, Brian McNamee. Talking to ESPN.com in 2007, Heckel recalled his teammate as not being the big type.

"He wasn't muscular in that way," Heckel told ESPN. "For his frame, which was like 6-foot, he got the most out of it. He was pushing 200 pounds. No bigger than that."

Heckel went to St. John's following another Wally Heckel,, Wally Heckel Sr., who attended the school and played baseball in the early 1960s. The elder Heckel went on to a five-season pro career in the Dodgers system.

With his own career, the younger Heckel started at rookie Medicine Hat. He hit .240 over 59 games. He scored in one late-June game, one of 38 runs he scored on the year.