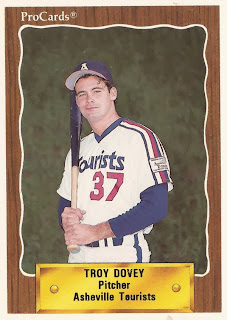 Troy Dovey was doing well at Miami-Dade South Community College in 1988, well enough to get some attention from the pros, his coach told The South Florida Sun-Sentinel that February.

"Troy can now see the light at the end of the tunnel," Dovey coach Charlie Greene told The Sun-Sentinel. "A lot of (pro scouts) are looking at him, and the work we've done with his mechanics on his delivery has really paid off for him."

That June, Dovey was selected in the draft and he turned pro, starting a career where he would see five seasons, but not AA.

Dovey has since gone on to another career, one with a whole different type of work, a career in show business.

Dovey's baseball career began that year in 1988, taken by the Astros in the 43rd round of the draft, out of Miami-Dade South.

With the Astros, Dovey played that first season between the rookie Gulf Coast League and single-A Asheville. Between them, he went 2-1, with an ERA of 1.24.

Dovey returned to Asheville for 1989, then again for 1990. His ERA both seasons ended up over 4. In 1990, Dovey went 9-7 at Asheville, including a late-July win where he gave up one run over seven innings.

From there, Dovey went into photography and retail. In 2004, according to his resume at TroyDovey.com, he went into video, producing and directing.

More recently, Dovey has been the guy behind a company called  CRUXSTAR Productions, producing and directing films and videos.

In 2010, Dovey was working as a production assistant, doing stand-in work, according to SouthMountainLake.com.

"It's probably one of the better jobs because you're all around the crew and all around the actors," Dovey told the site. "It's better than carrying around cables."