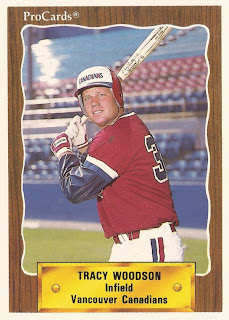 Tracy Woodson knew this was his chance, and he was trying to make the most of it.

In his first stint in the majors, filling in for veteran Dodger Bill Madlock in April 1987, Woodson hit his first major league home run. Woodson's home run, hit off Hall of Famer Nolan Ryan, helped the Dodgers to a 4-2 victory.

"Right now I've got two or three weeks while Madlock's out, but if I keep hitting the ball, maybe they'll find somewhere to play me," Woodson told The Associated Press after that game. "I want that position when he retires, so I have to do what I can right now."

Woodson ended up staying with the Dodgers through the end of May. But, while Woodson didn't take over for Madlock, he did go on to play in five major league seasons and one World Series.

His final two seasons came after the frustrations of nearly three full seasons back in the minors, and after he'd already retired.

Woodson's career began in 1984, taken by the Dodgers in the third round of the draft, out of North Carolina State University.

He played his first two seasons at single-A Vero Beach, moving to AA San Antonio in 1986. At San Antonio, Woodson hit .269, with 18 home runs. He also earned consideration for the major league roster in 1987, making the team after Madlock's injury.

In July, Woodson got some advice from teammate Kirk Gibson, to hit the ball up the middle, The AP wrote. Woodson instead hit it to left, winning the game.

Woodson, Dodgers manager Tommy Lasorda told The AP after that game, "is going to be a good player. That's why we brought him up from Albuquerque, where he had fantastic numbers."

In October, it was Woodson who was talking about Gibson. Woodson anticipated Gibson's legendary pinch-hit appearance in Game 1, teammate Mickey Hatcher told The Los Angeles Times.

For his own part, Woodson himself appeared in four out of the five games. He got one at bat in each, without getting a hit.

In fact, Woodson didn't get another major league hit for three seasons. He played in just four games for the Dodgers in 1989, getting six at bats without a hit.

The Dodgers then sent Woodson to the White Sox for 1990. He played the season at AAA Vancouver. He signed with the Braves for 1991, playing that season at AAA Richmond.

The Cardinals, though, still had interest in Woodson. After multiple calls, Woodson returned, The Times wrote. He also returned to the majors, getting into 31 games that year and 62 the next.

"My career was at the very bottom, as low as you can go," Woodson told The Times in August 1992 of his retirement. "But now I'm no longer scared to check the lineup card after going 0 for 4. Now I know I'm getting a chance."

Coming out of that spring training, Woodson was sent down, though he hit well, The AP wrote. Woodson, though, was sent down with a message from manager Joe Torre.

"Joe told me I'd be back up," Woodson told The AP in August, "and I put those words in the back of my mind."

Woodson then got right into coaching, serving as hitting coach with the AA Carolina Mudcats in 1997. He then moved to the manager's office for 1998, at short-season Erie.

By 2004, Woodson was manager at AAA Albuquerque. Since 2007, Woodson has work in college, serving as head coach of the Valparaiso Crusaders. He's also finished his own degree.

In July 2013, Woodson returned home to Richmond, signing on to serve as head coach of the Richmond Spiders.

"Tracy is an experienced coach with a proven record of success at all levels of baseball," Richmond athletic director Keith Gill said in a release, according to Baseball America. "Coach Woodson is the perfect fit for Spider Baseball and we couldn't be more pleased with his hiring."