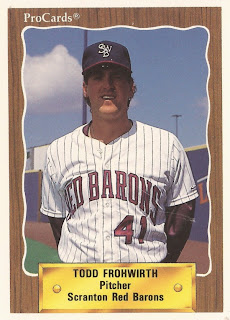 But, in August 1987 against the Cubs, Frohwirth came into the fifth inning, going 1.2 scoreless innings, picking up the win. He also struck out eventual National League MVP Andre Dawson, the first batter Frohwirth faced, as Dawson represented the go-ahead run.

"And I didn't have time to think it was Dawson," Frohwirth told The Inquirer afterward. "I just wanted to throw strikes and I threw him sinkers and sliders. And then I end up with a win in my first game, which right now makes me more excited than I've ever been in my life. It all really hasn't sunk in yet."

Frohwirth and his unusual submarine style delivery debuted in the majors that day in his fourth professional year. He would go on to pitch in a total of nine major league seasons, not throwing his final pitch until 1996.

Frohwirth's professional career began in 1984, taken by the Phillies in the 13th round of the draft, out of Northwest Missouri State University.

Frohwirth started with the Phillies at short-season Bend, making AA Reading in 1986. In 1987, he made AAA Maine and then major-league Philadelphia.

With the Phillies in 1987, Frohwirth got into 10 games in relief, getting that one win. He also gave up no earned runs, scattering 12 hits in 11 innings of work.

Frohwirth returned to Philadelphia for 12 more outings in 1988. This time, though, in 12 innings of work, he gave up 11 earned runs.

"It's frustrating," Frohwirth told The Inquirer after learning he wasn't going to continue with the big club. "It would have been nice if they had looked on me as one of the guys on the team in spring training. I had like a 2.80 earned run average after the All-Star break and I helped the team."

Frohwirth finished out the year at AAA Scranton. For 1991 then, Frohwirth signed with the Orioles.

In 1994, though, Frohwirth hit a wall. His outings dropped to 22 and his ERA nearly hit 11. He came back two seasons later for four final unsuccessful outings with the Angels.

Frohwirth has gone on to be a scout and a coach. In 1999, he served as pitching coach at single-A Beloit. By 2006, he was coaching in high school - high school basketball, girls basketball at Whitefish Bay in Wisconsin.

In 2011, Frohwirth took over as Mukwonago High School girls basketball coach, while scouting in Wisconsin for the Orioles, according to Mukwonago Chief.In 2013, he took the boys basketball job at Milwaukee Marquette High.

"If I would not have gone into baseball and become a baseball player and been sidetracked from a normal career path, I would have been a teacher or something in a school," Frohwirth told The Chief in September 2011. "I've always had that in my bloodline."