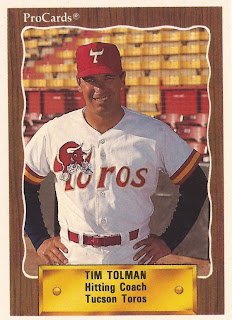 Tim Tolman wanted to be a major league starter. As his career turned out, the Astros and the Tigers had a different role for him, according to The Los Angeles Times.

"After watching major leaguers and playing for a couple years, you realize you may not be a superstar," Tolman told The Times in August 1987, after seeing time in his seventh big league campaign. "Everyone would like to start, but there comes a point when you have to realize you're a role player."

Tolman soon had himself a different role, that of minor league coach, manager and scout. It was in that role that Tolman served for two decades, and a role in which he returned to the bigs.

Tolman's career in baseball began in 1978, taken by the Astros in the 12th round of the draft, out of USC.

With the Astros, Tolman made AA Columbus in 1980, then AAA Tucson in 1981. He also made Houston in 1981, getting into four games as a September call-up.

Over the next six seasons, Tolman made the majors for at least nine games. He never hit above .200 in those stints, though. In 1983, Tolman got into 43 games, the most he would see in a season.

For 1986, he moved to the Tigers, getting into 16 games that year and nine in 1987. He continued playing in the minors through 1989, then started his coaching career.

Tolman moved on to managing in 1991, at single-A Burlington. In 1994, he managed high-A Osceola, watching over young Astros farmhand Corey Powell, who was having trouble at the plate.

''Clubs have to have the most patience with guys who have Powell's power potential,'' Tolman told The Orlando Sentinel. ''I can't think of anybody in the organization who has more. We just have to ride out the tough times with him. He's going to be worth the wait."

By 1996, Tolman was managing back at Tucson. He then turned Astros scout, serving in that role or as a supervisor through 2002. For 2003, Tolman joined the Indians organization, then the Nationals in 2007.

Tolman returned to the majors with the Nationals, serving as third base coach under manager Manny Acta. He stayed there for two seasons, then, in 2010, he reunited with Acta in Cleveland as bench coach. Tolman had once managed Acta and the two coached in the Astros organization.

Tolman's time with the Indians was then marked by his diagnosis with Parkinson's Disease. He eventually stepped down at the end of 2011, but he was to remain with the organization.

Upon Tolman's departure, Acta called Tolman his mentor in the minors, according to MLB.com.