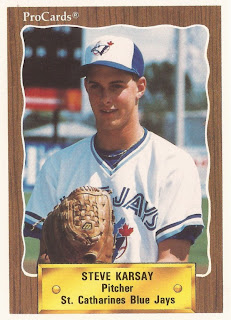 When those didn't work, then came Tommy John surgery, according to The Times.

"I think I've been through every emotion there is this year," Karsay told The Times in August 1996 as he tried to work his way back to the majors. "It's been a really tough and frustrating year for me. I think the only people that would know that are the people who have gone through the surgery."

It was in 1997 that Karsay's comeback paid off, and stuck. Karsay returned to Oakland that season and returned to make the bigs in eight more campaigns.

Karsay's professional career began in 1990, taken by Oakland in the first round of the draft, 22nd pick overall, out of Christ the King High School in Queens.

With the Blue Jays, Karsay started at short-season St. Catharines, moving to single-A Myrtle Beach for 1991 and high-A Dunedin for 1992.

For 1993, Karsay started at AA Knoxville, then got traded mid-year to the Athletics, Rickey Henderson going the other way. By mid-August, Karsay was in Oakland. In 8 starts, 49 innings, Karsay went 3-3, with a 4.04 ERA. In his second start, Karsay took his first loss, giving up six earned to the Tigers.

"I got behind a lot of hitters and had to come in with my fastball," Karsay told The Associated Press after that first loss. "These guys are very good hitters, and when they know what is coming, you're in big trouble."

Karsay came back for four starts in 1994, but them came his elbow problems, knocking him out of the rest of that season, all of 1995 and back to high-A for 1996.

Karsay moved to Atlanta in 2001 and then to the Yankees in 2002. As Karsay entered 2002, talk turned to where he started with the Athletics, and his comeback to become a top reliever.

''I'm just glad to see him have the success everybody thought he would,'' Goose Gossage, a spring instructor with the Yankees, told The New York Times. "Playing over here with the Yankees, they beat you in so many ways, but that bullpen is key. It's huge."

Karsay ended up getting into 78 games for the Yankees that year, with a 3.26 ERA.

Karsay played another three seasons in the majors, after missing 2003 to injury. He played his final games in 2006, with the team that first brought him to the majors, the Athletics.

By the time he was done, Karsay had pitched in a total of 357 major league games over 11 big league seasons.

By 2012, Karsay was a coach with the Indians in the Arizona League. In 2013, he served as pitching coach at single-A Lake County.

"I felt like I gave everything I had when I was here as a pitcher and had some pretty good seasons on some winnings teams," Karsay told The Willoughby News-Herald in July 2013. "I have the unique opportunity to come back and help some of these younger players refine their skills and hopefully one day make it to the big leagues."
1990 CMC-Pro Cards Tally
Players/Coaches Featured:1,267
Made the Majors: 702 - 55.4%-X
Never Made Majors: 565-44.6%
5+ Seasons in the Majors: 302-X
10+ Seasons in the Minors: 178
Posted by Steve78 at 1:00 PM