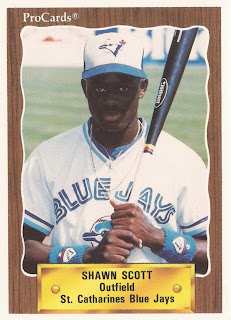 Taken by the Blue Jays out of high school in 1987, Shawn Scott instead spent a year in college, at the College of San Mateo.

It was a move that Scott believe benefited him, he told The San Mateo Daily Journal years later.

"My mind was to go to school," Scott told The Daily Journal. "I was nowhere near ready to go play against those athletes. I knew I needed a year in another good program, which was CSM’s program. So, I went."

Coming out of that year in college, Scott was able to still sign with the Blue Jays. He ended up spending six seasons in the Toronto system, making AAA Syracuse. That extra time in school, though, wasn't able to send Scott on to the majors.

Scott did end up getting extra time as a pro, ultimately playing 13 seasons, moving on from affiliated ball to spend another seven seasons in independent ball.

Scott's pro career began in 1988, signing with the Blue Jays out of San Mateo. He was originally drafted out of El Camino High School in South San Francisco.

Scott played his first season with the Blue Jays between rookie Medicine Hat and single-A Dunedin. The outfielder hit just .198 between them.

He returned to Dunedin for 1991, getting 12 games at AAA Syracuse. He moved full-time to AA Knoxville for 1992, then full-time to Syracuse in 1993. His average that full year in Syracuse, though, was just .210. It was his last year with the organization.

After not being recorded as playing in 1994, Scott came back for independent ball for 1995 at Tri-City. Scott ended up playing four full seasons at Tri-City and part of a fifth. In two of those seasons, he hit over .300.

Scott then finished out his career with independent Chico, playing there from mid-1999 to 2001.

"I was going to play baseball until they told me I couldn't, and maybe even a few more years after that," Scott told Inside Bay Area in 2011. "But I realized my son was starting to grow up and I didn't want to miss that. It was more important to me."