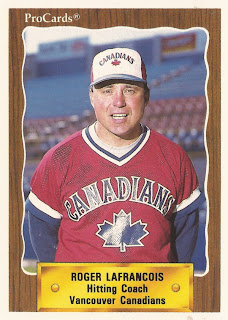 In the top of the 11th, Roger LaFrancois came to bat. His Boston Red Sox were tied with the hated Yankees 3-3.

With one out, LaFrancois hit one to second. He legged it out for an infield single. An error, a ground out and a single later and LaFrancois was across with the go-ahead run in a game the Red Sox won 5-3.

LaFrancois spent that year of 1982 on the Red Sox major league roster. This, the final game of the year, was only the eighth in which LaFrancois saw any playing time. He had spent the other 154 games on the bench, as Boston's third-string catcher.

Asked afterward by The Day of New London, Conn., if the season was, in fact, lost, LaFrancois said no, he believed it wasn't. He'd met a lot of good people. He'd learned a lot from the hitting coach. There was also one other thing.

LaFrancois' path to that moment began in his native Norwich, Conn. He excelled in high school baseball, becoming the first high schooler to make the Alaska Baseball League's Anchorage Glacier Pilots in 1974.

By 1977, LaFrancois was in the Red Sox system, taken in the eighth round out of the University of Oklahoma. He started at short-season Elmira, then went to single-A Winston-Salem in 1978.

Then came spring 1982. It looked like he had a shot. There were just some other catchers ahead of him, Rich Gedman one of them.

"I need a real good spring training this season to show them I can do the job," LaFrancois told The Day in March. "You sometimes have to dive in the stands or do things like that to show them you want it."

LaFrancois did want it. And he made the team. But he didn't make his major league debut until nearly two months later. He didn't get his first at-bat until June. His first hit came June 30.

Six more games over the next three months and LaFrancois' season, and his major league career, were done. He never made it back. Two more seasons in the minors and his playing career was done.

But speaking to The Associated Press after his first major league hit, LaFrancois said he was glad to get his first hit, he just didn't realize it would take so long. He was just waiting his chance.

"I come to the ballpark everyday thinking I'm going to be playing," LaFrancois told the AP. "But we're winning and everybody's happy, and I'm just thrilled to be a part of this team."