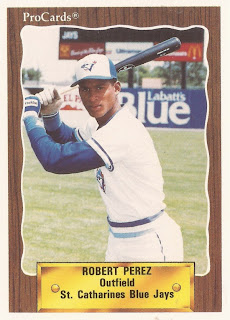 The Blue Jays needed a hit in this May 1996 game and Robert Perez was up to the task.

With the bases loaded in the 10th inning against Boston's Stan Belinda, Perez singled to left for the walk-off win.

"I'd faced him two times before, so I had an idea to look for a breaking ball," Perez told The Associated Press of Belinda. "That's what I got and I just made good contact."

Perez was in his third season with time in the majors that year, getting into 86 games. He ultimately would play in three more, plus one season in Japan. But he never really found the regular major league role he was looking for.

Perez' professional career began in 1989, signed by the Blue Jays out of his native Venezuela.

He first hit the field in 1990, playing at short-season St. Catharines. By the end of the year, he was at single-A Myrtle Beach. He made high-A Dunedin in 1991, then AA Knoxville for 1992.

With the Yankees in 2001, Perez told The New York Times he was hoping for an extended stay with the club.

''I've worked so hard to prove to people I can play in the big leagues,'' Perez told The Times in May.

Perez' time in the majors in 2001 amounted to just eight games, spent between the Yankees and the Brewers.

Though his time in the majors was done, his time as a player was far from being done.