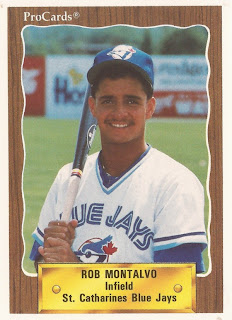 Rob Montalvo got some advice from the Blue Jays minor league hitting coach in May 1992.

"Use your legs, use your legs," coach Bill Buckner told Montalvo in a hitting session, according to Scripps Howard News Service.

Montalvo got that advice in his fourth professional season that year, playing at AA Knoxville. By the end of the year, Montalvo was at AAA Syracuse.

No matter what advice Montalvo received, AAA was as far as he got. In seven total seasons, he never made the majors.

Montalvo's career began in in 1989, taken by the Blue Jays in the seventh round of the draft out of Memorial High School in West New York, N.J.

At Memorial, Montalvo was a part of a team described years later by The Newark Star-Ledger as the state's best. Montalvo played shorstop on the 1988 squad that went 28-1.

With the Blue Jays, Montalvo played his first season between single-A Myrtle Beach and single-A Dunedin. He hit just .180 between them.

Montalvo never hit well over his seven-season career, never hitting better than .245 in a single season.

Montalvo played 1990 between Myrtle Beach and short-season St. Catharines. He got his first brief looks at AA Knoxville and AAA Syracuse in 1991, playing most of that year at Dunedin. In a June game at Dunedin, Montalvo picked up three hits.

He returned to Knoxville and Syracuse in 1992. In July 1992, Montalvo knocked in two runs in a game on a single for Syracuse.