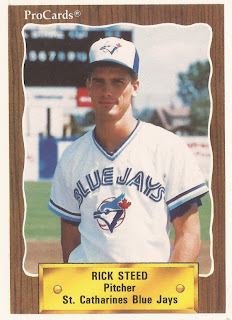 Rick Steed later recalled his 2001 season, the one where his independent Somerset Patriots took the league title, as the one in which he had the most fun.

"They knew what they had to do to get ready, and everything just fell into place for everybody," Steed told The Hunterdon County Democrat in 2007. "We probably didn't have the best or biggest name players that year, but I don't think anyone on that team ever gave up."
Steed, in his 13th professional season that year, certainly wasn't a big name. He was in his third season that year with Somerset, after an affiliated career that spanned a decade.

In that affiliated career, Steed never made enough of a name for himself to make the majors.

Steed's professional career began 1989, taken by the Blue Jays in the fifth round of the draft, out of Covina High School in California.

With the Blue Jays, Steed started at rookie Medicine Hat, getting seven games there. For 1990, he moved to short-season St. Catharines. Steed went 12-13 in 1991, with single-A Myrtle Beach.

Steed then spent three seasons at high-A Dunedin, turning reliever his final season there, in 1994. After getting 19 and 20 starts his first two seasons there, Steed got 30 outings, all in relief, in 1994. His ERA also dropped to 2.66, from 5.03 the previous year.

He stayed with the Blue Jays one more season, splitting the 1995 campaign between AA Knoxville and AAA Syracuse. At Syracuse in early August, Steed's pitching won him Pitcher of the Week honors. But Steed never made Toronto.

Steed moved to the Braves system for 1996, then to independent High Desert for 1997. His last time in affiliated ball came in the Mets system in 1998.

His time with the Mets also was his only other time at AAA, getting 13 outings at Norfolk. That August, Steed lost a shutout in the ninth inning of an 11-1 Norfolk win.