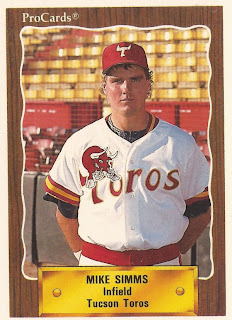 In the middle of his only full season in the major leagues, Mike Simms knew his role on the Rangers, and that was to play when needed.

In mid-August, he was needed to fill in for an injured Juan Gonzalez.

"I don't play often," Simms told reporters after picking up three hits in one game. "I'm a bench player and when I get a chance, I work and do what I do."

Simms got into a total of 86 games in the majors that year, including one in the ALDS against the Yankees. It was his 14th season as a pro, his eighth with time in the majors. He'd get one more before his career was out.

Simms' career began back in 1985, taken by the Astros in the sixth round of the draft out of Esperanza High School in California.

He played his first two seasons in rookie ball, in the Gulf Coast League. He made single-A Asheville in 1987, hitting 39 home runs and knocking in 100 runners.

"I guess I came of age, turned the corner," Simms told The Orlando Sentinel the next season of his time at Asheville. "All I can hope is to have a good year this year and be invited back to camp next spring."

In 12 games for the Astros in 1990, Simms got four hits in 13 at bats. He also hit a home run and participated in a triple play. The triple play was the first of two Simms would participate in less than a year.

Going into 1991, Simms was just looking for a roster spot. With many young players in camp and older players moved on, Simms tried not to put too much pressure on himself, he told The Los Angeles Times that March.

"I can only do what I can do," Simms told The Times. "I'm not going to put pressure on myself by trying to do more. I was surprised, like everybody else, that they let so many veterans go, but it's a great opportunity for the young players."

Simms got into 49 games for the Astros that year. To that point generally a first baseman, Simms switched to the outfield. At the plate, he hit just .203 in 123 at bats.

Signing with the Rangers for 1997, Simms saw his most time to that point, 59 games. In late August, Simms hit a three-run double to help the Rangers to an 11-5 win.

In 1998, his full season in the majors, Simms delivered a game-winning single in early August, but had to wait to take the batters box beforehand, due to a field issue. "I just tried to stay loose and go up there with a clear mind," Simms told The Associated Press.

In early September, Simms hit a home run that helped win another game, and pull the Rangers to within a game of first place.

"I got enough of it and the ball carries here," Simms told reporters. "More importantly than hitting a home run, it came in a situation that was helpful to the team."

Simms got one more season, shortened by injury. He got four final games in the majors in September, ending his career.