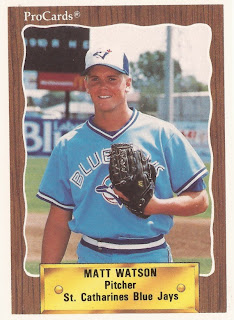 Matt Watson had hopes coming out of Cal State Fullerton in 1990 and those hopes were to improve, according to The Los Angeles Times.

"College is so geared to winning," Watson told The Times. "We have guys on our staff who are more consistent than me. I'm more of a power pitcher but I'm inconsistent. I should be able to develop more in the pros."

Watson spoke with The Times after signing his pro contract with the Toronto Blue Jays. Watson, though, was hardly able to develop in the pros. He hardly had time to. His career was limited to that single season, 16 outings.

Watson's pro career began and ended that year in 1990, starting with the Blue Jays taking him in the 14th round of the draft, out of Fullerton.

He had been selected the year before by the Giants in the seventh round, but he chose to stay in school.

At Fullerton, Watson wasn't above some seemingly good-natured ribbing. In May 1990, Watson recalled the year before when the team's infield had a problem with errors. Watson and other pitchers had a pool going on the next error, Watson recalled to The Times.

"We actually did it," Watson told The Times. "Five or six pitchers would each put a dollar in a pool, and whoever picked the right guy collected the loot. I don't know what coach would think about it, but that was last year. We don't do that this year."