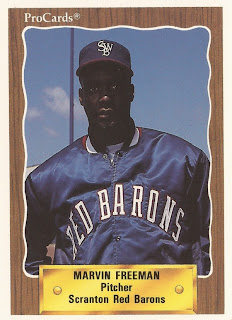 Marvin Freeman had a promising start for the Phillies in September 1986, winning two of his three starts, Knight-Ridder wrote.

But, by July 1990, that promise turned to frustration as Freeman never lived up to those early expectations. The Phillies finally gave up on him, trading him to the Braves.

"He's still got a fine arm and he probably should go over there and win some ball games and make us all look bad," Phillies GM Lee Thomas told Knight-Ridder, noting he'd called Freeman up three times in two years with Freeman doing little, "I think for his career, this is probably the best."

While Freeman never would live up to that initial promise, he would go on to a career where he spent parts of 10 seasons in the majors and even come in fourth in the Cy Young voting one year.

Freeman's career began in 1984, taken by the Phillies in the second round of the draft out of Jackson State. A former bowmaker as a teen, Freeman played that year at short-season Bend, going 8-5 with a 2.61 ERA.

"He throws hard and has good breaking stuff," fellow Phille rookie Bruce Ruffin told The Allentown Morning Call of Freeman that September. "If he can throw strikes he will be tough. That's the thing to watch for with Marvin, his control."

Ruffin spoke before Freeman's two wins. Freeman went seven innings in one, giving up a single run. In the other, he went six and gave up no runs. He also gave up just one hit in each game.

Freeman, though, didn't return to Philadelphia until 1988, going 0-7 at AAA Maine in 1987 after hurting his arm. Returning to the majors for 1988, Freeman got 11 starts and he wanted to do his best

With the Braves, though, Freeman settled down. In nine outings, he picked up a win and gave up just three earned runs in 15.2 innings. For 1991, Freeman posted an ERA of 3.00 in 34 outings, a back injury in August keeping him from taking that ERA into the postseason.

Freeman stuck with the Braves through 1993, slowing his final year to a 6.08 ERA. Released by the Braves, Freeman signed on with the Rockies for 1994 and had a stellar year.

By 1998, the Chicago native was coaching in the minors, serving as pitching coach with the independent Cook County Cheetahs, The Chicago Tribune wrote.

"The couch was getting a little soft, so I thought I had to start doing something again," Freeman told The Tribune of his turn as coach. "This gives me an opportunity to coach and still be at home with my family."

More recently, Freeman has served as an instructor with the Diamond Sports Academy in Mokena, Ill., and as a sophomore baseball coach at Rich Central High in Olympia Fields, Ill.