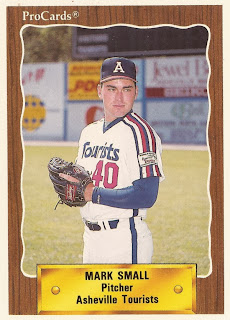 Mark Small waited into his eighth pro season to get his taste of the majors. Once he got it, though, he wanted another, he told his hometown Seattle Times.

"I always had said, 'I want to get there (majors) even if it's just for one day,'"Small told The Times. "Then you get there and you say, `Man, that's not enough.' "

Small got that first taste in the form of 16 outings for the Astros in 1996. For Small, those outings would have to be enough. In a career that spanned a dozen seasons, those were the only major league games Small got.

Small's professional career began in 1989, taken by the Astros in the 17th round, out of Washington State University. Small also followed his older brother Jeff Small into the game, according to The Times. Jeff Small played nine seasons as a pro, but never made the bigs.

With the Astros, Small started at short-season Auburn, moving to single-A Asheville for 1990. At Asheville, Small told The Times his early worries as a pro.

"I thought I had to do it for not just myself but for my family and friends," Small told The Times. "If I ever got released, what would my friends think? I think I'm pretty much over that right now."

Small made AA Jackson in 1993, then AAA Tucson in 1994. Aside from a stint as a starter at high-A Osceola in 1992, Small worked exclusively in relief.

Small didn't make his debut in Houston until April 1996. He actually made two trips to the Astros, one in April and one beginning in late-July. His debut couldn't have gone worse. His first two outings amounted to a single inning and five earned runs given up.

By the time got sent down at the end of the month, though, he'd gotten his ERA down to 4.66. By mid-July at Tucson, Small was getting talked up again, despite lingering issues with back spasms.

"He's the key to the whole second half for us," Tucson manager Tim Tolman told The Tucson Citizen. "We've got to have him healthy, and for his sake, he has to be healthy for a chance to return to the big leagues. He's a major-league pitcher. It's a positive for us and a positive for him."

Small returned to Houston at the end of July, getting nine more outings. His final outing came Sept. 3, finishing with a 5.92 ERA. In his last outing, he lasted just a third of an inning, giving up four earned.

Small ended up playing four more seasons as a pro, playing them largely at AAA in the Astros, Rangers and Expos systems. He never returned to the bigs.