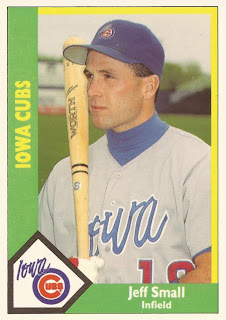 The young Marlins' second baseman was hurt in April 1993 and among those considered to replace him as AAA second baseman Jeff Small, The South Florida Sun-Sentinel wrote.

Small, in his ninth season as a professional, had been hitting .290 early on. But he also hadn't been in the Marlins' big league camp, The Sun-Sentinel wrote.

Small's career began in 1985, taken by the Cubs in the first round of the January draft. He was sent that year to short-season Geneva, hitting seven home runs, but hitting just .220.

He started the season with 28 games back at AA, in Charlotte. He knocked in a run with a double in an April 21 game against Orlando. By late May, he was at Iowa, hitting a two-run home run May 23 at Norfolk.

Small returned to Iowa for 1990, playing 125 games, hitting .287. He also made the AAA All-Star game in July, hitting a double. He had his own personal All-Star game the previous month, getting six hits on June 6, earning a tie for the most in franchise history.

Small returned to Iowa for 1991, but it was his last season with the Cubs' system. He also only played in 36 games. The next year, it was off to Cincinnati and AAA Nashville, hitting .278 on the year.