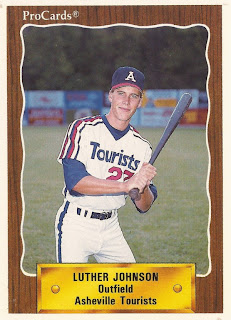 In his third professional season, Luther Johnson had already been injured twice and cut once, The Seattle Times wrote in June 1990.

But he was still playing.

"There certainly have been a lot of ups and downs - more downs than ups," Johnson told The Times that June. "But I try to put that in the past."

For Johnson, he would end up playing in just one more season, his career ending without making it to AA.

Johnson's career began in 1988, signed by the Phillies as an undrafted free agent out of his native state of Washington.

With the Phillies, Johnson played 1988 at rookie Martinsville. He hit just .188, with a single home run. It was his only season in the Philadelphia organization.

For 1989, Johnson moved over to the Astros system, playing at short-season Auburn. He bettered his average to .253, hitting six home runs.

Johnson made it to single-A Asheville in 1990, again hitting .253, knocking in 61. He started off the year quickly, tripling in one game and doubling twice in another.

Years later, Johnson's manager at Asheville, Frank Cacciatore, remembered Johnson to The Greatest 21 Days as "a left-handed hitter who had a little bit of pop, struck out a little bit."