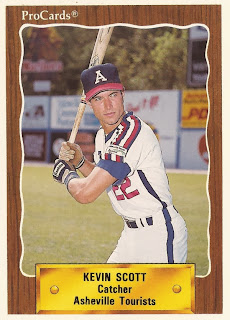 Kevin Scott didn't hit a lot of home runs. But he hit one when it counted.

In the fifth inning of Game 1 of the 1992 Florida State League playoffs, Scott put his team ahead in the fifth with a solo round-tripper, according to The Orlando Sentinel. While it put the team ahead, his team couldn't hold that lead, eventually falling in extras.

In his first four professional seasons, though, Scott hit only six regular season home runs. He would hit just one more, his career ending after the next season, Scott never making the majors.

Scott's professional career began in 1989, taken by the Astros in the 32nd round of the draft, out of Washington State University. At Washington State, Scott hit .306 as a redshirt sophomore.

With the Astros, Scott started at short-season Auburn, getting into 60 games, 17 behind the plate. He hit .245.

For 1990, Scott moved to single-A Asheville, moving to catching almost full-time. He ended up hitting .274 over 129 games.