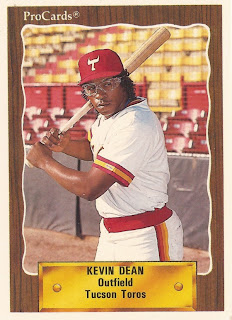 Taken first overall by the Expos the year before, the pressure was on Kevin Dean and Dean knew it, Dean told The South Florida Sun-Sentinel in June 1987.

"They expect a lot out of you, but you can only do so much," Dean told The Sun-Sentinel. "I always have a lot of pressure on me, (but) I'm just like other players. I was just more fortunate to get drafted No.1."

Dean, though, was never fortunate enough to make the majors. He made AAA Indianapolis in 1989, but he never made Montreal or any other big league club.

Dean's career began in 1986, with his selection by the Expos 15th overall out of Hogan High School in Vallejo, Calif.

In late April, Dean scored three runs, going 2 for 2 in a West Palm Beach win. The next month, he hit a two-run home run to help extend a team winning streak.

Dean moved to AA Jacksonville in 1988, his average dropping to .256. At AAA Indianapolis in 1989, Dean's average dropped further, to .215. By July, he was traded to the Braves, one of three players sent to Atlanta for Zane Smith.

By May 1990, Dean arrived in the Astros system, where he would stay through the end of his career in 1992.

The former top pick split time between the Astros' AA and AAA clubs for much of three seasons. His career ended that year in 1992 with 79 games at AA Jackson and 35 at AAA Tucson.