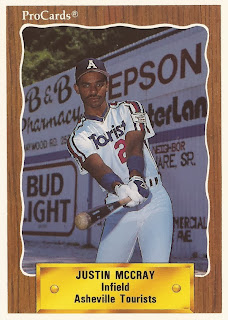 Playing at rookie-level Helena in 2012, Mike Turay looked back on who helped him start his professional career, according to The Davis Enterprise.

"I'm very thankful to Justin McCray for taking time to come out and watch me play," Turay told The Enterprise. "I wouldn't have gotten this opportunity without him."

McCray's role in Turay's opportunity was as a scout for the Milwaukee Brewers. With McCray's recommendation, according to The Enterprise, the Brewers selected Turay in the 24th round of the 2012 draft.

Years earlier, it was McCray who was the one given a chance, drafted deep in the 41st round of the 1989 draft by the Brewers, out of California Polytechnic State University.

McCray ended up taking his own opportunity to three seasons as a pro, but a lengthy post-playing career in baseball as a scout.


McCray's professional career began in the rookie Arizona League, getting into 52 games, hitting .296.
He moved to single-A Asheville and the Astros for 1990.

McCray finished out his brief career in 1991, with 21 games with the White Sox at high-A Sarasota and 20 games at independent Reno.

His playing career over, McCray soon went into scouting. For 2000, he was named a scout for the Brewers.

McCray has since been watching players and making calls. In 2006, he called Chris Errecart, telling Errecart the Brewers were taking him in the fifth round. "How's that sound," McCray asked, according to The Stockton Record.

"That sounds great," Errecart responded, according to The Record.