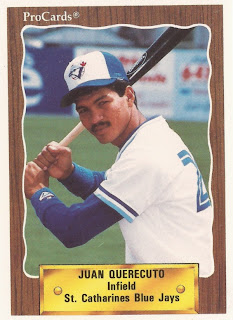 In the bottom of the 11th of this July 2002 contest against Amarillo, Querecuto sent a Amarillo pitch over the wall, according to The Amarillo Globe-News, for a walk-off home run.

Querecuto also hit that home run in what could be considered his own career's extra innings. Querecuto spent five seasons in the minors before not being recorded as playing for four seasons.

When he returned, Querecuto was in independent ball, and playing in another four campaigns.

Querecuto's career began in 1989, signed by the Blue Jays out of his native Venezuela.

With the Blue Jays, Querecuto first hit the field in 1990, with short-season St. Catharines. He got into just nine games, going 4 for 20.

Querecuto then isn't recorded as playing again for the next four seasons. He then is credited as returning in 2000, with Rio Grande Valley in the independent Texas-Louisiana League.

That August, Querecuto scored on a double. He also stole six bases on the year, one in another game against Amarillo. Overall, he hit .326 on the year.

Querecuto moved to Edinburg for the next two seasons, hitting .276 his first year there and .284 the next. In the 2001 playoffs, Querecuto hit a double to lock up the league title. Querecuto then played his final season in 2003 between Rio Grande Valley and Coastal Bend.