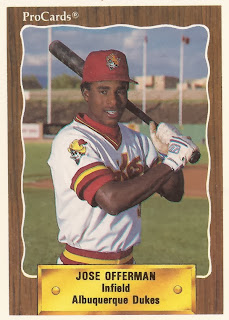 Jose Offerman was expected to do special things with his bat when he was called up to the majors in August 1990, just not necessarily so soon and not necessarily in this way.

In his first major league at bat, leading off the Aug. 20 game against the Expos, Offerman hit a home run, something only 60 other players in history had done to that point.

"I wasn't nervous," Offerman told The Associated Press later. "Baseball's the same, whether you play here, Albuquerque or San Antonio."

Offerman never did live up to the expectations placed on him. But he did make the All-Star team twice and play in a total of 15 big league seasons, last playing there in 2005.

But it's something else that Offerman has done with a bat, and his fist, since his last big league game that have perhaps eclipsed his playing career.

Offerman's career began in 1986, signed by the Dodgers out of his native Dominican Republic. He first got onto an American field in 1988, with rookie Great Falls. He hit AA San Antonio in 1989, then AAA Albuquerque in 1990.

Offerman, though, was unable to continue the pace he'd set at AAA, or in that first at bat. In 29 games with the Dodgers, Offerman hit just .155, an average that contributed to his one steal.

Coming into 1991, Offerman also had troubles in the field, the shortstop fielding poorly in spring training. Early on, he made the Dodgers in May, then didn't return until August. His major league hitting problems also continued, hitting .195 in 113 at bats on the year.

"I try to do everything they tell me to do," Offerman told The Los Angeles Times after losing his starting job at the end of August. "But I hit better when I feel more comfortable, when I feel like I can concentrate. Sometimes that is hard."

He returned to his old hitting form in 1994, though, hitting just .210. In June, his frustrations boiled over with Offerman throwing what The Times called a tantrum. Offerman was asked to bunt with the pitcher on deck. He didn't want to bunt.

"I got mad for the wrong reason," Offerman told The Times after being sat three games after that incident. "I went too high."

By 1995, though, Offerman got things together. In June, he was even talked about as a contender for the All-Star team. On June 1, he was hitting .358. He was also doing well in the field, having a stretch of just one error in 20 games, The Times wrote.

"It would really be something, after all I've been through," Offerman told The Times of making the team. "When you make the all-star team, it means you made it to the top. Only the best ever make it. It would be nice to say, 'Hey, I was there. I was one of the best.' "

Offerman made the All-Star team that year and four years later with the Red Sox. In the middle, he played three seasons with the Royals hitting well and running well. In Kansas City, Offerman didn't hit lower than .297 and stole 45 bases in 1998.

After having been essentially released by the Red Sox, Offerman trashed the clubhouse, The Seattle Post-Intelligencier wrote. Offerman tried to answer the mounting criticism.

"Everybody is not going to like you," Offerman told The Post-Intelligencier. "That's the way it goes. They read more into things than what it really is. Whoever knows me personally can judge me because they have been with me and seen me. Other people are going to think what they think, but they don't know me."

Offerman got into 29 games for the Mariners. After a season with independent Bridgeport in 2003, Offerman returned for two final seasons in the majors, with the Twins, Phillies and the Mets, ending his big league career.

Then his other troubles began. In 2007, Offerman returned to the independent Atlantic League, with the Long Island Ducks. In August, the Ducks visiting Offerman's old team in Bridgeport, Offerman was hit by a pitch.

Offerman's response was shocking. He charging the mound, bat in hand, hitting both the pitcher and catcher. Arrested for assault, Offerman eventually got two years of probation. The catcher, John Nathans, suffered lasting injuries.

Then, in January 2010, Offerman's anger showed again. Managing the Dominican Winter Baseball League's Licey Tigers, a team Offerman took to the championship a year before, Offerman swung at an umpire, this time with his fist. That incident led to Offerman being banned from that league for life.