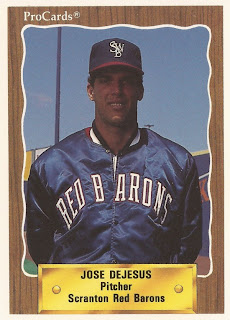 Jose DeJesus tried a new approach on the mound in 1990, he told The Philadelphia Inquirer.

"When I go out there now, I don't look at the hitter; I blank him out of my mind," DeJesus told The Inquirer. "I used to think too much. I used to worry about the different hitters and what they could do."

DeJesus' new approach seemed to work. By the time the year was out, DeJesus had compiled 22 starts for the Phillies and a 3.74 ERA.

In all, DeJesus was in his third season with time in the majors. He would go on to see time in two more. He would also go on to undergo reconstructive shoulder surgery, coming back from that to see his final five outings in the majors.

DeJesus' career began in 1983, signed by the Royals as an undrafted free agent out of his native Puerto Rico.

Also in 1988, DeJesus made Kansas City. He debuted in September, getting into two games. He gave up eight earned in 2.2 innings. DeJesus returned to Kansas City for three more outings in 1989, giving up four earned over eight innings.

For 1990, DeJesus arrived with the Phillies in a trade. He then spent most of the season in Philadelphia, going 7-8. In August, DeJesus threw a six-hitter, picking up a 2-1 win.

"It just goes to show you what happens when you throw strikes," Phillies manager Nick Leyva told The Philadelphia Daily News about DeJesus after that game. "Jose just stayed within himself tonight. He's hot or he's cold. And he was hot tonight."

"This is the first time, in nine years as a professional, that I've ever had a winning record," DeJesus told The Inquirer after his 10th win. "It gives me confidence. It feels good to know that I can win."

DeJesus ended up not winning again that year, losing his final five decisions. He also didn't win again in the majors until 1994. In between, he underwent shoulder surgery.

In 1998, after he signed with Atlantic City, DeJesus made clear to The Inquirer what his goal was.