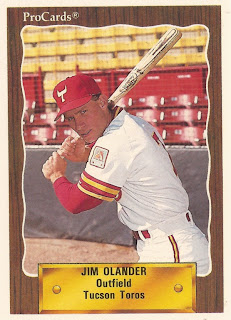 Jim Olander suffered injuries, was blocked by established players ahead of him and, at times, he wasn't sure if he should continue playing.

But he did continue playing. And, in September 1991 he made the majors - after 10 years working to get there.

"After waiting so long, this is a dream come true," Olander told The Milwaukee Sentinel after his call-up. "I wondered if it was a waste of my time, but something good came out of it."

Olander would play 12 games for the Brewers that September and early October, getting to the plate 11 times, without a hit. He wouldn't get back.

Olander's path to the majors began a decade earlier, in 1981. Olander was selected by the Phillies that year in the seventh round of the draft, out of Sahuaro High in Tucson.

He stayed with the Phillies system for nine seasons, starting at rookie league Helena in 1981 and ending with three seasons at AAA. In between, Olander hit well. He also got injured.

In 1986, with AA Reading, Olander hit .325 and made the Eastern League All-Star Team, getting two hits in the mid-season exhibition. He also later made the Reading Baseball Hall of Fame.

The Reading Eagle that July wrote that Olander was ready for the majors then, praising his offense and his defense. But his progress was blocked by a glut of outfielders in the Phillies system.

"I've worked hard to get to the place I'm at right now," Olander told The Eagle. "I'm feeling comfortable, and the hard work is really paying off for me."

Olander moved up to AAA Maine for 1987 and 1988, but they were abbreviated seasons. He played 43 games in one and 25 the next. A hip injury and elbow surgery were to blame, The Sentinel wrote.

Olander played one last season with the Phillies system in 1989, a full season. He played 111 games for Scranton, hitting .252. For 1990, Olander signed briefly with Houston, playing at AAA in his hometown at AAA Tucson.

By the end of May, he was sent to the Brewers, the team that would eventually bring him to the majors. At AAA Denver in 1990, Olander hit .288. The next year, he hit .325 and won league MVP. He got his call-up after Denver won the AAA Alliance championship.

Olander made his first major league start Sept. 23, going 0 for 4. A second start came days later, that time he went 0 for 2. In his run, Olander did score, twice.

For 1992, it was back to Denver. He was also in line for a second call-up in May. But, just before his opening came, Olander broke his leg and was lost for the season, The Sentinel wrote.

Olander played through 1994, counting 14 seasons as a professional, but he never got back to the majors.

Olander has since continued in baseball, working in scouting, serving as a cross-checker and a scout for the Tigers.