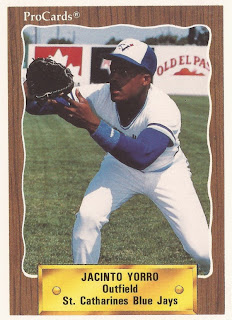 Jacinto Yorro started his professional career as an outfielder. Before he was done, he tried his hand at pitching.

In 1991, in his second year as a pro, Yorro took the mound for the short-season St. Catharines Blue Jays and he did it twice.

In those two outings, he went a total of two innings. He struck out three and didn't give up a run, for a 0.00 ERA.

Though a small sample, it was a better result than Yorro's hitting that season. His batting average also had a zero in front of it, 0.97. That second season was Yorro's last in professional ball.

Yorro's career began a season earlier, signed by the Blue Jays as an undrafted free agent out of his native Dominican Republic.

He then returned to St. Catharines for his second season. In 44 games, Yorro ended up hitting that 0.97, with no home runs and just 4 RBI. Those games, along with his two pitching outings, amounted to his second and final season as a pro.