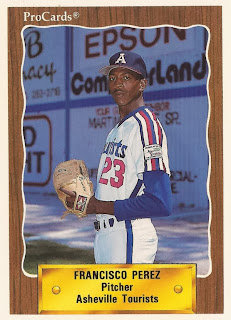 The result: A grand slam.

"I was looking fastball, something inside," Taylor told The Spartanburg Herald-Journal. "(Perez) threw me a slider low and in, which wasn't a very good pitch in that situation. He just made a mistake."

Perez made that pitch in his fourth season as a pro. It was also his last, his short career ending at season's end.

Perez' career began in 1986, signed by the Astros as an undrafted free agent out of his native Dominican Republic.

With the Astros, Perez first hit the field in 1987, playing in the rookie Gulf Coast League. He went 2-6, over 12 starts. He picked up one of those losses in a late-August contest, against the GCL Dodgers.