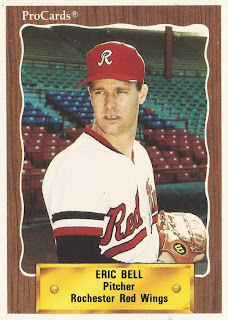 Eric Bell admitted he was nervous in this September 1986 outing. But, for his first major league start, that was understandable.

The way he responded, though, was by pitching into the seventh inning, giving up just three runs and picking up the win.

"I was a little tense, a little tight out there," Bell told The Associated Press afterward. "That's the way I am when I'm a bit nervous."

Bell was actually in his second season with major league time that year. In his third, he would become a regular in the Baltimore rotation, and nearly throw a no-hitter.

Bell's professional career began in 1982, taken by the Orioles in the ninth round of the draft, out of Beyer High School in Modesto, Ca.

With the Orioles, Bell started at rookie Bluefield, making single-A Hagerstown in 1984 and 1985. In September 1985, having never played above single-A, Bell got the call straight to Baltimore.

Bell got into four games in relief for the Orioles that September, giving up three earned runs in 5.2 innings of work. After playing 1986 between AA Charlotte and AAA Rochester, he returned to Baltimore, getting four starts, going 1-2.

By late-July, Bell had gone through a rough spot. But, with a compete-game win, he believed he had figured things out, The AP wrote.

"I thought every pitch I threw had to be a nasty pitch," Bell told The AP. "Now, I just try to throw good pitches for strikes."

After that season, Bell didn't make it back to the majors until 1991. His 1988 campaign consisted of just seven starts at AAA Rochester, then major elbow surgery. He then played a shortened 1989 and then got 27 starts back at Rochester for 1990.

He signed for 1991 with the Indians, and returned to the majors for 10 relief outings. In those outings, he gave up just a single earned run over 18 innings of work. That September, Bell earned a win in four innings of work.

"The arm's fine. It felt fine last year," Bell told The AP after that September win. "I just needed to pitch. I knew I'd be able to pitch again, but  I wondered (about the future) just like a guy coming up from the minor leagues for the first time. Confidence will take you a long way in this game."