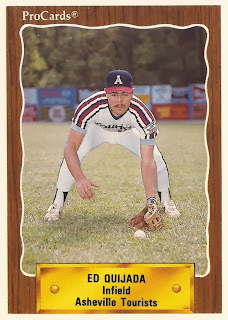 Ed Quijada worked in 1991 to make the transition as smooth as possible, and have success.

Quijada had played the last three seasons as an infielder. Now, in 1991, he was a pitcher.

"It was tough," Quijada told The Houston Chronicle that August. "There was a lot of pressure on me coming out of the bullpen with the game on the line. The hardest thing for me was getting rid of the butterflies."

Quijada never did make the majors, playing that year and parts of three more in the minors. He threw his last pitch after a return in 1997.

More recently, though, Quijada has been trying to make the best of another transition, a life altering one.

It's a transition forced by a 2009 car accident, one that left Quijada paralyzed from the neck down.

In the months and years since, Quijada has been working to regain as much function as possible, as well as being a father to his kids and husband to his wife, according to a series of YouTube interviews.

"From the day I woke up from this accident," Quijada told an interviewer in a video posted in November 2009, "I said, I just basically said 'Game on. It's another game.' My whole life has always been around games. I said, you know, let this be a game."

For Quijada, the actual games began in high school, a four-sport star at Rio Vista High School in California. Of the four sports, though, it was baseball Quijada chose.

Quijada signed with the Astros out of Rio Vista, taken by Houston in the 16th round of the 1988 draft.

With the Astros, Quijada played that first year and the next in the rookie Gulf Coast League. For 1990, Quijada moved to single-A Asheville, playing the year at third base.He never could really hit, though, hitting in the .220s two out of his first three seasons.

For 1991, Quijada tried pitching, the spot he would be for the final four seasons of his career. He returned to Asheville that year, then moved to single-A Burlington in 1992. His time in Burlington, though, was his last time in the Astros system. He went 2-2 in 18 outings, 9 starts that year, with an ERA of 4.26.

Quijada is recorded as playing in two more seasons, in 1993 with independent Sioux City, then back in 1997 at independent Chico.

By the time Quijada arrived at Chico, though, he had met his wife Amy. Soon married, they had three children, according to the YouTube interviews. Quijada went into construction, playing in the local softball league. He also built their house in Northern California.

Then, in February 2009, on a trip to visit his father in Lake Tahoe, Quijada's car crashed. The resulting spinal cord injury left him Quijada essentially paralyzed from the chest down, according to the interviews.

Quijada has gone through treatments and therapy, according to the videos. Helping pay for it all has been fund raisers. Months after his accident Quijada's old team the Asheville Tourists even held a charity auction to benefit him.

In one of the videos, Quijada and his wife Amy talk abut the drastic changes the injury has made in their lives, and their efforts to keep things going. Three kids, Quijada said, are difficult enough to raise, even without an injury like his. The key, though, is to learn to adapt, he told the interviewer.

"Patience. Patience is probably the biggest thing with this injury and everything," Quijada says in the video. "You have to learn patience because the things that are so accustomed to going so fast, are so much slower."
1990 CMC-Pro Cards Tally
Players/Coaches Featured:1,307
Made the Majors: 711 - 54.4%
Never Made Majors: 596-45.6%
5+ Seasons in the Majors: 307
10+ Seasons in the Minors: 181