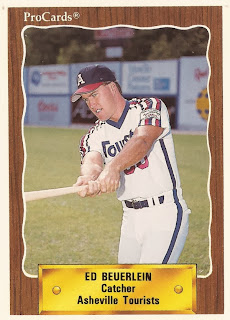 Ed Beuerlein's work ethic with the 1990 Asheville Tourists was something that his manager Frank Cacciatore remembered years later.

"Just a baseball rat," Cacciatore recalled to The Greatest 21 Days in August 2013.

Beuerlein worked hard in college to turn pro and worked hard as a pro. No matter how hard he worked, though, Beuerlein's career ended up lasting just three seasons.

Beuerlein's pro career began in 1990, signed by the Astros as an undrafted free agent, out of Scottsdale Community College and Louisiana Tech.

At Scottsdale in 1987, Beuerlein helped his team to a lead in an April game with a single. In 1988, after moving to Louisiana Tech, Beuerlein tried out for the U.S. Olympic Team, but didn't make one of the early cuts.

In a March 1989 contest, Beuerlein knocked two doubles and drove in four in a Louisiana Tech win.

With the Astros in 1990, Beuerlein got into 54 games at single-A Asheville, playing under Cacciatore. He ended up hitting .299, with 25 RBI.

For 1991, Beuerlein played between single-A Burlington, high-A Osceola and AA Jackson. His time at Jackson amounted to nine games, Beuerlein picking up nine hits in 19 at bats. Between the three levels, he hit just .229.